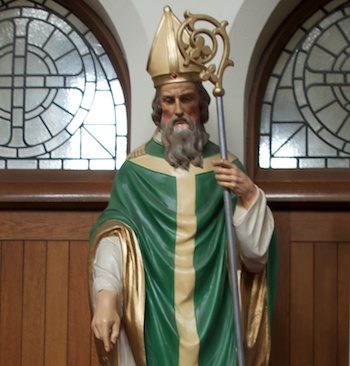 St Patrick is the patron saint of Ireland. The presence of this statue reflects the significance of Irish migrant workers who settled in large numbers in the northwest of England, bringing their own flavour of religious practice, and in many places such as Chester, accounting for a large proportion of the parish population.

St Patrick lived in the fifth century, somewhere on the west coast of Britain (local traditions associate him with many places in Scotland, Wales and the West Country). He is believed to have belonged to a Romanized family, already a Latin speaker in childhood. At the age of 16, he was captured by an Irish raiding party and forced to work in slavery as an animal herder. He managed to escape after six years and find his way back to his family. He became a priest, and is believed to have studied for many years in Europe. But in a dream, he felt himself called back as a missionary to Ireland, and returned there as a bishop, in or around the year 432 AD.

Over the next few decades, he travelled widely throughout Ireland, gaining the trust and loyalty of many local chieftains, and successfully spreading the doctrine of Christianity throughout Ireland. He was recognised as a man of great learning, personal integrity, and modest bearing. His Feast Day is celebrated on March 17th.

I arise today
Through a mighty strength, the invocation of the Trinity,
Through belief in the threeness,
Through confession of the oneness,
Of the Creator of Creation.

Part of St Patrick's Breastplate, a prayer originally ascribed to the saint, but now believed to have been written in the 8th century. It nevertheless is informed by the saint's spirituality, and reflects on the trinitarian nature of God and the protective figure of Jesus Christ.