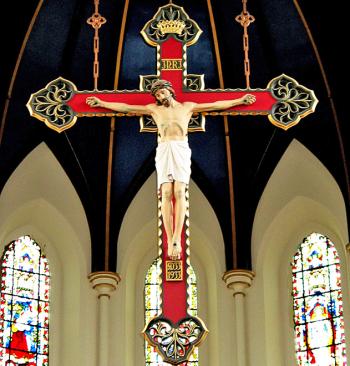 Perhaps the most distinctive sacred representation in St Werburgh's Church is the large crucifix suspended above the entrance to the sanctuary.

In calling it a rood cross, we are being tautologous. Rood is the Old English term for a cross. It became associated in medieval times specifically with the True Cross, the one on which the Saviour was hung. In Church architecture, the Rood is typically the large centrally-placed crucifix on which the faithful focus their attention. Often it sits on top of a wooden structure, the rood screen, which frames the entrance to the sanctuary, the place where the altar resides. But before the rood screen became an established feature of Church architecture, it was traditional to suspend the Rood high above the heads of the people. This is the arrangement in St Werburgh's, and it produces a dramatic effect, while leaving an uncluttered view of the sanctuary area.

The startling red of the body of the Cross immediately captures the eye, and forms a striking contrast with the blue background of the ceiling of the apse. Worked into the ornate filigree at the top is a gilded crown - an emblem of Christ's kingship, emphasised by the towering position of the Cross, high above the normal affairs of the Earth.

In contrast, the naturalistic body of the crucified Lord emphasises the humanity of Jesus, his vulnerability to pain, suffering and death, and his association with the common man.

The inscription at the foot of the Cross combines the dates of 33 AD - traditionally, the date when Jesus was crucified - and 1933, the year in which the Cross was erected in St Werburgh's Church, and proclaimed a Holy Year of Human Redemption worldwide.