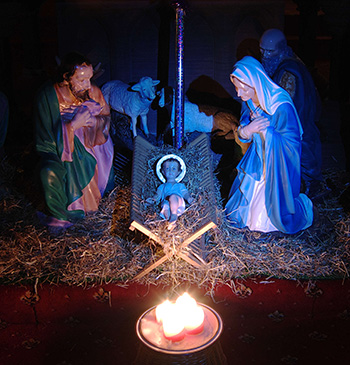 During the Christmas season, the Nativity figures are arranged in the traditional representation of the birth of Jesus in a stable, attended by his mother Mary and father Joseph, visited at first by shepherds, and later by the magi, the wise men from the East who bring gifts of gold, frankincense and myrrh to the newborn Jesus.

Luke 2:4-19 So Joseph set out from the town of Nazareth in Galilee for Judaea, to David's town called Bethlehem, since he was of David's House and line, in order to be registered together with Mary, his betrothed, who was with child. Now it happened that, while they were there, the time came for her to have her child, and she gave birth to a son, her first-born. She wrapped him in swaddling clothes and laid him in a manger because there was no room for them in the living-space. In the countryside close by there were shepherds out in the fields keeping guard over their sheep during the watches of the night. An angel of the Lord stood over them and the glory of the Lord shone round them. They were terrified, but the angel said, 'Do not be afraid. Look, I bring you news of great joy, a joy to be shared by the whole people. Today in the town of David a Saviour has been born to you; he is Christ the Lord. And here is a sign for you: you will find a baby wrapped in swaddling clothes and lying in a manger.' And all at once with the angel there was a great throng of the hosts of heaven, praising God with the words: Glory to God in the highest heaven, and on earth peace for those he favours. Now it happened that when the angels had gone from them into heaven, the shepherds said to one another, 'Let us go to Bethlehem and see this event which the Lord has made known to us.' So they hurried away and found Mary and Joseph, and the baby lying in the manger. When they saw the child they repeated what they had been told about him, and everyone who heard it was astonished at what the shepherds said to them. As for Mary, she treasured all these things and pondered them in her heart.