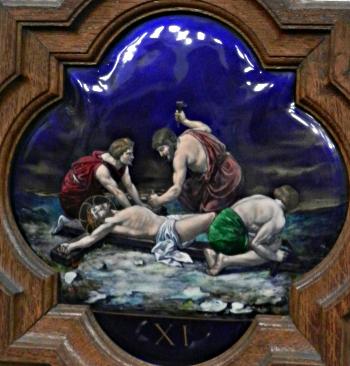 Stations of the Cross. XI: Jesus is nailed to the Cross

Jesus is accorded the punishment of the common criminal, nailed to a wooden gibbet, raised aloft to hang under the full weight of his own tortured body, exposed in the dusty afternoon sun to the mockery of those who wish him expunged from their world. The humiliation is complete; man's boundless inhumanity to fellow man meted out to the Son of God, the Good Shepherd who cares for all the flock.

Mark 15:25-32 It was the third hour when they crucified him. The inscription giving the charge against him read, 'The King of the Jews'. And they crucified two bandits with him, one on his right and one on his left. The passers-by jeered at him; they shook their heads and said, 'Aha! So you would destroy the Temple and rebuild it in three days! Then save yourself; come down from the cross!' The chief priests and the scribes mocked him among themselves in the same way with the words, 'He saved others, he cannot save himself.  Let the Christ, the king of Israel, come down from the cross now, for us to see it and believe.' Even those who were crucified with him taunted him.

As the execution party works with a cruel efficiency, the supine figure of Jesus on stony ground assumes a certain passivity, an acceptance of the final hours. His face is turned outwards, to look upon those dear to him who have followed all the way to Golgotha; but also upwards, to the heavenly Father who awaits him.

In nailing Jesus to the wooden Cross, his tormentors treat him like an inanimate object - just another fixture in a piece of carpentry. How often do we reduce people to things? How easily we overlook their essential humanity!