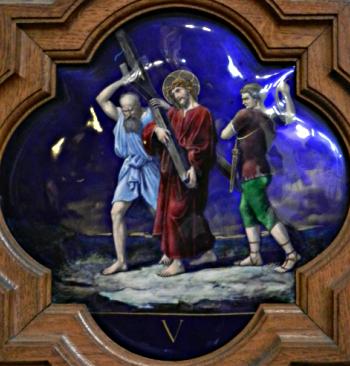 Stations of the Cross. V: Simon of Cyrene helps Jesus to carry his Cross

So great was the beating inflicted upon Jesus that there was a very real chance that he would be unable to carry his own Cross all the way to the place of execution.  The soldiers supervising the proceedings therefore had no objection to a passer-by helping the prisoner for part of the way; indeed, it is possible that they pressed this man into such service, 'enlisting' him, in the words of the Gospels. Whether willingly or not, Simon, a native of the North African city of Cyrene, gives some relief to the struggling Jesus. Symbolically, the burden of the Son of God is shared with humanity for a brief period.

Luke 23:26 As they were leading him away they seized on a man, Simon from Cyrene, who was coming in from the country, and made him shoulder the cross and carry it behind Jesus.

In this scene, Simon, in pale blue, is portrayed as an elderly man, unable to take the full weight of the cross from Jesus, who helps him to steady it and drag it along. Behind, the officer of the guard shows no compassion, continuing to whip the prisoner despite the presence of his new helper - as likely as not, showering blows upon Simon as much as upon Jesus.

Was Simon a willing volunteer or did he help Jesus just because he was forced to?

We can suppose that Simon was resentful of the help he was forced to give. After all, he was probably just a tourist, caught up in the grisly spectacle, gawping at the spectacle. And now he is pulled out of anonymity, and actually made to help some criminal! And the help is not just some token gesture - he is forced to stagger along under the weight of a heavy wooden cross. How often have I been in such a situation? How often have I been made to do something I had no real desire to, and yet something which needed to be done, something which was right, and helpful to others? How often have I even understood that I was doing something useful, something good? Oh Lord, keep me from feeling resentful when I am called upon to do good things, to reach out and help people in need, to do the right thing, even when it's the last thing in the world I want to do just at that moment.

Dear Jesus, help me to help others, to shoulder their burdens as Simon helped to shoulder yours in your hour of greatest need.