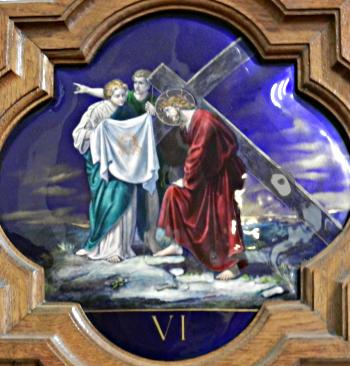 Stations of the Cross. VI: Veronica wipes the face of Jesus

The Gospel account of the Passion tells us that there were many women in the crowd accompanying Jesus along the Way of the Cross, but Veronica is not mentioned by name. Traditionally, she is depicted as pushing forward through the crowd to wipe the bloodied and perspiring face of Jesus with her veil, an act of compassion and caring. It may be that she is someone whose life has already been touched by Jesus in his journey to Jerusalem, one of the 'sinful' women to whom he has reached out the hand of forgiveness and compassion, raising her from the lowly position of the despised among society to a person of equal worth and dignity amongst all us fellow sinners.

In this view Jesus pauses for a moment's rest, his foot supported on a small rise in the ground that allows him to brace himself against the weight of the cross. Despite the guard behind her, imperiously directing her to go away, Veronica bends forward with a deeply compassionate expression, holding the cloth on which Jesus has wiped away his sweat and blood. On the cloth is the full imprint of the suffering face of the Saviour. Behind, the sky deepens in colour, the clouds become increasingly ominous.

See also the portrait of Veronica in the stained-glass window near the Blessed Sacrament altar.

Unlike Simon of Cyrene, Veronica seems to come forward entirely of her own free will. Lord, give me the compassion, the courage and the energy to step forward when I am needed, to help other people in their time of distress.

God bless all those who care for the sick, the downtrodden, the distressed. Praise be for nurses, care workers, paramedics, first-aiders; and for all those who take pity on people who are in need of help, and who are there just for them.