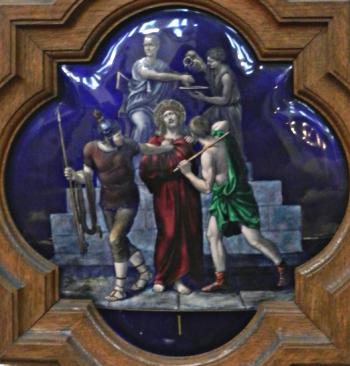 Stations of the Cross. I: Jesus is condemned to death

The religious trial of Jesus took place before the Jewish religious Council, the Sanhedrin, who found him guilty of blasphemy in claiming to be the Son of God. But Judaea was a Roman protectorate, and capital punishment required the sanction of the Roman Prefect, Pontius Pilate:

Mark 15:1-15 First thing in the morning, the chief priests, together with the elders and scribes and the rest of the Sanhedrin, had their plan ready. They had Jesus bound and took him away and handed him over to Pilate. Pilate put to him this question, 'Are you the king of the Jews?' He replied, 'It is you who say it.' And the chief priests brought many accusations against him. Pilate questioned him again, 'Have you no reply at all? See how many accusations they are bringing against you!' But, to Pilate's surprise, Jesus made no further reply. At festival time Pilate used to release a prisoner for them, any one they asked for. Now a man called Barabbas was then in prison with the rebels who had committed murder during the uprising. When the crowd went up and began to ask Pilate the customary favour, Pilate answered them, 'Do you want me to release for you the king of the Jews?' For he realised it was out of jealousy that the chief priests had handed Jesus over. The chief priests, however, had incited the crowd to demand that he should release Barabbas for them instead. Then Pilate spoke again, 'But in that case, what am I to do with the man you call king of the Jews?' They shouted back, 'Crucify him!' Pilate asked them, 'What harm has he done?' But they shouted all the louder, 'Crucify him!' So Pilate, anxious to placate the crowd, released Barabbas for them and, after having Jesus scourged, he handed him over to be crucified.

In this scene, Jesus stands in the foreground, wearing the red robes signifying kingship, and the cruel crown of thorns, forced upon him in mockery by the guard. Two of the guards prepare to drag the prisoner away from the proceedings, while Pilate sits behind, washing his hands of the business.

Did the Sanhedrin really know who Christ was? Or were they acting with some sort of bravado - just wanting power?

Let us remember all the many cases in our World where people are charged unjustly and accused falsely by courts that act out of political motives or to wield power. Father, guide those who exercise the law to use their talents wisely, fairly and justly.

Christ appears to have an attitude of submission. Or is he deep in prayer to his Father, praying for the souls of those treating him so?

Dear Jesus, you were condemned to death through the actions of the crowd, the same crowd who had greeted you less than a week before. Do not let me be swayed by peer pressure into behaving wrongly.

Stations of the Cross
Station II