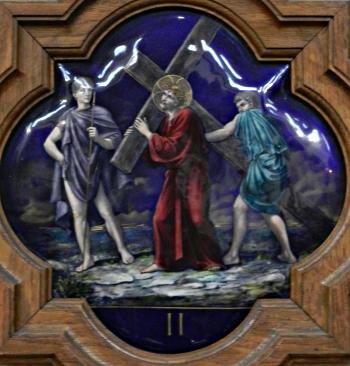 Stations of the Cross. II: Jesus takes up his Cross

Jesus stands condemned, but he will not be accorded a dignified execution. As the first stage of his public humiliation, he is scourged and mocked by the soldiers who act as the guardians of law and order. Then he begins the journey to the place of punishment, Golgotha, the Hill of the Skull, weighed down by the very instrument of his own execution.

Mark 15:16-20 The soldiers led him away to the inner part of the palace, that is, the Praetorium, and called the whole cohort together. They dressed him up in purple, twisted some thorns into a crown and put it on him. And they began saluting him, 'Hail, king of the Jews!' They struck his head with a reed and spat on him; and they went down on their knees to do him homage. And when they had finished making fun of him, they took off the purple and dressed him in his own clothes. They led him out to crucify him.

Under the supervision of his captain, one of the guard struggles to balance the heavy wooden cross as Jesus, still in his red robe, shoulders it at the cross-piece. Legs braced and apart, the figure of Christ sags under the weight. It is clear from this depiction just how weighty this last burden must be.

It must seem to Jesus that his suffering just goes on and on. He has been treacherously handed over to the authorities by a friend. His other friends have deserted him. Peter, his most trusted friend of all, has gone out of his way to deny all knowledge of him. He has been falsely tried, passed from one court to another in a mockery of the judicial process. The people who cheered for him on his entry to Jerusalem have now turned against him, and give the possibly wavering Pilate no option but to condemn him. He is a pawn in political and religious power play. He has been flayed, mocked, spat upon, abused and humiliated by his captors. His message of hope, of truth, of glory falls on deaf ears and is scorned. Blood runs down his face from the wicked crown of thorns. And now this: in your abject physical weakness and suffering, carry and drag this heavy, heavy scaffold on which you will die. Could any thing be more unfair? For many of us, indeed, it is unfairness itself that acts as our cross, that weighs us down, that brings over us a deepening darkness and shadow. Dear Lord! Help me to withstand the crushing despair of unfairness! Help me to ensure that I do not burden others with it. Walk with me, and help me to move forward if I must, if that burden does become part of my life as it did for you in your suffering.

Dear Jesus: help me to carry my cross with as much courage and fortitude as you did on your way to Calvary.

Stations of the Cross
Station I
Station III