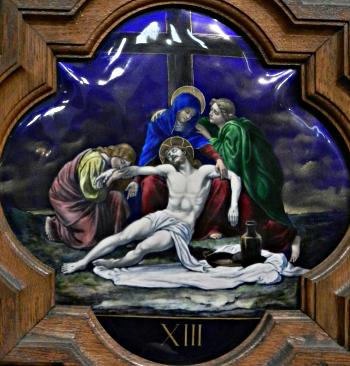 Stations of the Cross. XIII: Jesus is taken down from the Cross

The crucifixion proceeds to its inevitable conclusion. Yet Jesus has already died before the soldiers approach to deliver the coup de grace, and there is no need for a final blow to ensure a punctual end. And in this way, Jesus's death fulfils the Old Testament prophecies of the Messiah. After the mockery of the crowd, the blood lust of the spectators at a ceremonial execution, silence falls. There is an unsettled air as Jesus is taken down from the Cross. What was intended to be the end of this man's rabble-rousing, his activities that were so much of a nuisance to the established authorities, already begins to take on the sense of something not finished, indeed, something new, yet to begin.

John 30: 31-38 It was the Day of Preparation, and to avoid the bodies' remaining on the cross during the Sabbath - since that Sabbath was a day of special solemnity - the Jews asked Pilate to have the legs broken and the bodies taken away. Consequently the soldiers came and broke the legs of the first man who had been crucified with him and then of the other. When they came to Jesus, they saw he was already dead, and so instead of breaking his legs one of the soldiers pierced his side with a lance; and immediately there came out blood and water. This is the evidence of one who saw it - true evidence, and he knows that what he says is true - and he gives it so that you may believe as well. Because all this happened to fulfil the words of scripture: Not one bone of his will be broken; and again, in another place scripture says: They will look to the one whom they have pierced. After this, Joseph of Arimathaea, who was a disciple of Jesus - though a secret one because he was afraid of the Jews - asked Pilate to let him remove the body of Jesus. Pilate gave permission, so they came and took it away.

In this elegant composition, the artist captures the sorrow of those who have loved Jesus and now cradle him tenderly, but also their sense of relief that his sufferings have finished. The arms of Jesus are still stretched out, mirroring the form of the Cross that looms above. The ominous clouds filling the sky contrast with the peace and stillness of the brightly illuminated foreground.

Father in Heaven, spare me from a violent or a painful end - but sustain me with the promise of peaceful repose when the trials of this world have passed.