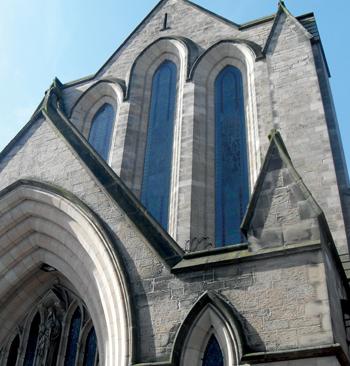 A Guide to the Parish Church of St Werburgh, Chester

The outside of the Church is built of grey Stourton stone with blue Welsh slate for the roof. The nave has four bays separated from the aisles by four massive pillars of red sandstone.

In the Porch by the main door you will see a plaque commemorating St John Plessington, who was martyred at Barrel Well Hill, Boughton in 1679.

On entering the main church at the back is the Statue of the Sacred Heart. A popular devotion for many Catholics, the Sacred Heart represents God's love for us in Jesus Christ.

Statue of St Patrick, reminding us of the many Irish people who came to Chester during the 19th century and whose generosity in the face of extreme poverty made it possible to build St Werburgh's in the first place.

At the top of the aisle is the restored War Memorial Chapel, with the names of parishioners who gave their lives in both Wars and subsequent conflicts.

Nearby is the Statue of St Joseph with the Christ Child.

On the left is the Baptismal Font. Baptism is the first of the Sacraments of Initiation into the Catholic Church. The position of the Font, at the front of the church and near to the Sanctuary, reminds us that through Baptism we become members of the People of God.

Near the Font is the Organ Console: two thirds of the pipes are on the screen above the Main Entrance; one third is behind the statue of St Werburgh. This is an historic 1926 J. J. Binns organ, removed from Queen's Park Church in Glasgow when it closed. It was refurbished and installed in St Werburgh's by George Sixsmith & Son in 2004. There are 1810 speaking pipes and over 1500 moving parts.

The stained glass windows in the body of the the church depict scenes from the Life of Christ. Starting above the Organ Console we have The Annunciation, then The Visitation, followed by The Nativity, The Presentation of the Baby Jesus in the Temple and the Finding of the Child Jesus. These are the Five Joyful Mysteries of the Rosary. Then we have the Five Sorrowful Mysteries: The Agony in the Garden (the other side of St Patrick's statue), The Scourging at the Pillar, The Crowning of Thorns and now, on the other side of the church, Jesus Carrying His Cross and finally, The Crucifixion. On the other side of the Confessional and the Good Shepherd statue, we have the Five Glorious Mysteries: The Resurrection, The Ascension, The Descent of the Holy Spirit on Our Lady and the Apostles, The Assumption of Our Lady and finally, on the other side of St Werburgh's statue, The Crowning of Our Lady as Queen of Heaven.

The stained glass windows behind the organ were removed, before demolition, from St Laurence's Church, Birkenhead. These represent the Birth, Death and Resurrection of the Lord.

The Pulpit was given by Pat Collins of Pat Collins Funfair at the turn of the last century. The funfair comes to Chester every May during the Races. At the re-dedication Service in 2002, one of the guests of honour was Anthony Harris, the great grandson of Pat Collins.

Next to the Pulpit is a modern Statue of Joseph the Carpenter, patron saint of workers, who is honoured as the husband of Mary and Guardian of the Holy Family of Nazareth. This statue complements the Statue of Our Lady with the Christ Child on the other side.

To the left of St Joseph is the Blessed Sacrament Altar.. This is where Hosts consecrated at Mass are reserved and they are also available for taking to the sick and housebound.

On the right is the Shrine to St Werburgh. Patron of our Parish and our City, we celebrate her Feast on 3rd February every year.

By the Good Shepherd Statue are two small rooms, the Confessional, where generations of Catholics have celebrated the Sacrament of Reconciliation.