May They All Rest in Peace.

This year, with the withdrawal of American and British troops from Afghanistan in August, I thought it would be appropriate to pay tribute to the two British servicemen who lost their lives in that conflict from our “Home Regiments” in the Dale Barracks. Whichever regiment is stationed there, St Werburgh’s offers Chaplaincy support, and it has been an immensely important of our life together. Captain Stephen Healey and Corporal Michael Thacker have been honoured in our War Memorial Chapel ever since they made the final sacrifice.

457 British Servicemen lost their lives in the 20 years of the Afghanistan deployments. Somebody’s son, somebody’s brother or sister, somebody’s husband, somebody’s dad. For Stephen and Michael, while they were at the Dale, they were our Parishioners. May they both rest in peace.

If you’re a student at Chester or any other University, and over 18, we’d love to welcome you.

Covid-19 and Standing at the Back

Please, everyone: to keep us all Covid safe, could everyone SIT for Mass, and not stand at the back? That’ll prevent congestion during Holy Communion.

Advent Day by Days (£1) and November and December Sacred Heart Messengers (£1.50 each) both on sale at the back of church.

Next Sunday, 21st November, another joyous day for St Werburgh’s as we welcome Reg, our sparkling 93-year-old, into the Catholic Church. It’s been a joy instructing him, and he is immensely welcome into the family of St Werburgh’s. Never too late to become a Werbie!!!

Celia’s family wished to hold a small, private Funeral, but are delighted that we can also have a much bigger, public Memorial Mass for her here in St Werburgh’s. Tuesday, 30th November at 12.00 noon. We will be using all the hymns and readings that Celia herself chose for her funeral. Everyone very warmly invited to attend.

Many thanks to Alex and the Cathedral Nave Choir for a super concert of choral and organ music. Great to be open again for Concerts and Recitals!

Blessing of Graves at Blacon and Overleigh

Sunday 21st November at Blacon, the following Sunday, 28th, at Overleigh, 2.00-4.00 pm each afternoon. Just turn up! At Overleigh, I will begin in the older side (on the right as you drive towards the Overleigh Roundabout) at 2.00 pm and move over to the newer side at 3.00 pm.

7.30 pm, when every name in our Holy Souls Book will be read out and you are invited if you wish to come forward and light a candle in their memory.

The book is updated every week during November: the cut-off point for each update is Thursday evening. Final Edition: next Sunday, 21st Nov.

Please find your copy inside the Newsletter today.

Donations in Memory of Cath Blucher

An amazing total of £2,800 was donated, to be divided between Parkinson’s, Dementia, the Heart Foundation and the Hospice. Thanks, everyone!

Photo of the Week 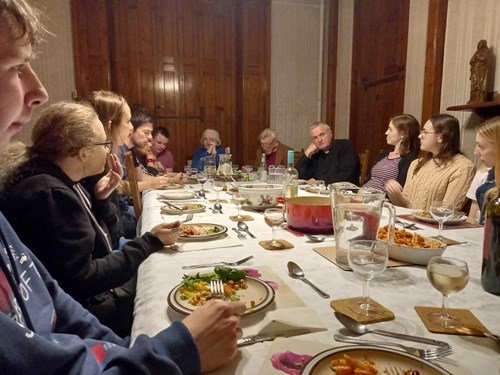 CathSoc Shared Table Supper FP wondering if anyone is going to pass down that bottle of red wine… (They did. Eventually.)